Jeff Falkingham has been a fan of Sherlock Holmes since he first saw Peter Cushing in Hound of the Baskervilles​ in 1959. Besides writing two pastiches and several essays (see the BOOKS page) about Holmes, Jeff has created a program that has drawn rave reviews at more than 100 libraries, schools, historical societies and book or social clubs across Minnesota and its neighboring states.
Jeff's menu of topics regularly includes 6 to 8 units, allowing you to customize a program to suit the interests of any audience, and to fit any time frame. Each unit is delivered in a different format (skit, slide show, lecture, etc.), ensuring a wide variety of informative and educational entertainment.

Sherlock Holmes is one of the most famous characters in literary history -- and he has continued to maintain that status for over 130 years!

In April of 2021, Jeff recorded a 45-minute podcast with Eden Prairie City Manager Rich Getschow. Rick is an excellent interviewer who asked intriguing questions -- about much MORE than Sherlock Holmes! You can hear the podcast here: 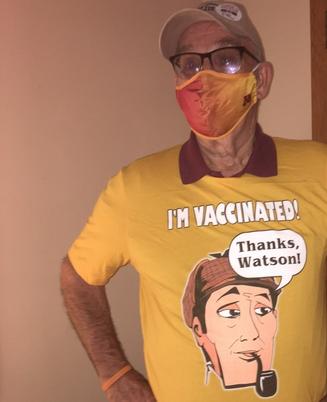 + The 60 tales in Arthur Conan Doyle's original Sherlockian Canon have been translated into more than 90 languages, and sold over 100 million copies.
+  Dozens of writers have created scores of new Sherlockian adventures (known as pastiches).

+  Holmes has been the subject of scholarly studies at many of the world's greatest universities.
+  The Great Detective has appeared in more than 200 movies -- and at least that many stage plays and radio or television programs.
+  Benedict Cumberbatch, Robert Downey, Jr., Jonny Lee Miller and Ian McKellen are just a few of the (most recent) popular actors who have portrayed Holmes on screen.
​     ​Yet how much do YOU really know about Sherlock Holmes?

+  The Many Faces of Mr. Holmes
+  Doyle & Clemens: A Perspective

+  The Science of Sherlock Holmes
+  10 Keys to a Good Mystery