Timya Owen, outgoing President of SinC, had this to say about Jeff's program:

"What a FUN night we had at the Twin Cities Sisters in Crime year-end celebration! We had a great time with our guest performers, Sherlock Holmes (aka Carl Brookins) & Dr. Watson (aka Jeff Falkingham), and I highly recommend Jeff's Holmes presentation for any library, Friends of the Library, or book club gathering."

For a newspaper review of Jeff's corresponding program for SCHOOLS, click here.

​      Sometimes serious and sometimes silly, Carl Brookins and Jeff Falkingham teamed up to entertain 40+ members of the Sisters in Crime (Twin Cities chapter) at their annual holiday gathering in December [2019].  The two authors began with "An Arthur Conan Doyle Primer" - an amusing costumed skit in which Sherlock Holmes (Carl) and Dr. John Watson (Jeff) discuss the work of their creator, Sir Arthur Conan Doyle. The skit concluded with bits of trivia about the Great Detective's hat, cape, pipe, and famous quotes.

Jeff then illustrated "10 Key Elements of a Good Mystery" by reading excerpts from one of his Sherlockian tales for young adults. The program closed with a Parlor Game, in which the audience was challenged to identify a famous Conan Doyle tale (and occasionally the tale's victim or villain) based on the recitation of a 5-line limerick.

All three of the evening's acts are part of Jeff's "Elementary, My Dear Watson!" multimedia presentation. See the Book Talks page for a current menu of offerings.

Images below (photos courtesy of Twin Cities Sisters in Crime):

BEFORE: The two entertainers fine tune the script for their skit.

AFTER: Jeff immediately regrets asking if Carl has more to say! 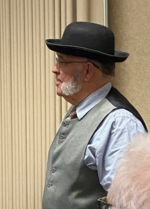 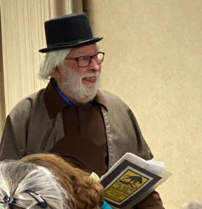 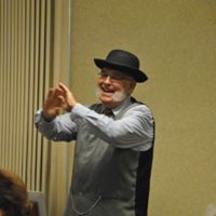 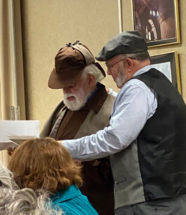